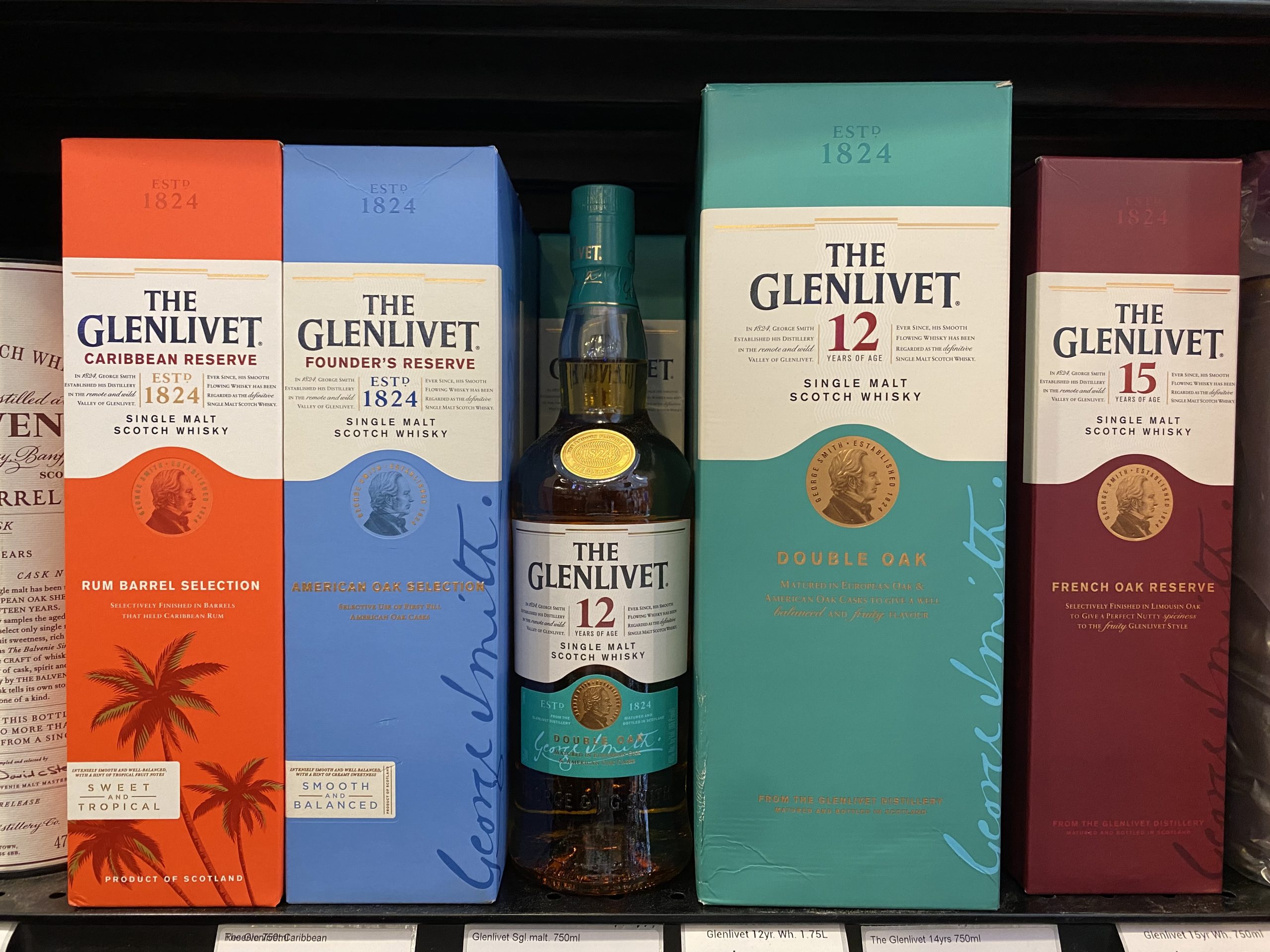 Glenlivet prices are very reasonable for the quality product it is. The distillery, located in Scotland, is one of the world’s leading producers of Scotch. They have released 27 different labels under the brand and continue to flourish in the ever changing market.

Glenlivet’s roots can be traced back for centuries. Despite the whiskey’s humble beginnings, the whiskey is one of the world’s most renowned spirits today.

George Smith nestled his way into the remote Livet Valley in Scotland to hide from soldiers while perfecting his illicit dram in 1822. King George IV even visited the valley to taste the whiskey, obviously not caring that it was illegal at the time. The year of 1824 brought about a change in legislation. Smith rode to Elgin, brandishing two flintlock pistols to fend off any threatening smugglers he might encounter along the way, and became the first legally licensed distiller.

By 1952 the Scotch was gaining momentum and was even mentioned all the way in London by Charles Dickens. He wrote a letter to a friend urging him to try the “rare old Glenlivet” that went far beyond his expectations. Through the years, Smith passed on and other family members rose up to take his place. One of which was Captain Bill Smith Grant, a decorated war hero. It was a difficult time for the distillery and production slowed with the American depression and prohibition. However, with a little perseverance, Grant pulled through and acquiring the Pullman Train Company as one of their first customers. They served mini bottles to thirsty Americans spreading the whiskey across the continent.

By way of trains, planes and cars, Glenlivet was spread to all corners of the world. It even made up for half of all whiskey consumed in America alone! Today the distillery is run by Master Distiller Alan Winchester who continues George Smith’s vision. They currently make twenty seven different labels and are still one of the most popular whiskeys in the world.

Glenlivet has divided their collection into three categories, Explore, Heritage and Travel. In this section, we’ll take a look into each of these sections.

A single malt with a bold, tropical feel from barrels that have previously been used to age Caribbean rum. The nose has notes of apple and pear with hints of tropical banana. On the palate you’ll find rich caramel and toffee followed by tropical fruit.

Inspired by origins, aged 12 years and fashioned after the Speyside style crafted by George Smith in 1824. The nose is tropical and fresh with coconut and fudge aromas. The mouthfeel is rich and fruity with notes of peach jam and poached pears. There’s also some clove and cinnamon in the finish.

The Code. This beauty is a sophisticated Single Malt Scotch Whiskey that combines American Oak and old Canadian Rye barrels. The result is a Scotch with baked apple and caramel aromas. The finish is long and fruity with notes of pear, pineapple and spicy ginger.

A sort of game from Alan Winchester, Glenlivet’s Master Distiller. The black bottle is void of any information pressing the drinker to unlock the taste for themselves. This bottle begs the consumer to challenge their senses and discover their own tasting notes. However, in case you can’t get your hands on a bottle of this, we’ll share our experience. Will you taste the same? On the nose we found a nice bit of baking spice, namely cinnamon, followed by light floral and apple pie aromas. The finish was long and refreshing and on the palate we detected juicy pear, pineapple, ginger and licorice. Let us know what you think!!

This Scotch is finished in Oloroso Sherry casks from Jerez to add a rich and lush texture. The characteristic raisin aroma shines through on the nose followed by other dried fruits and cinnamon. The palate is smooth and creamy with balanced fruit and spice

Aged in white oak giving the Scotch heavy notes of vanilla. There are also pear and chocolate on the nose. We tasted tropical fruit and citrus before a long creamy finish.

This heavily peated cash adds a whole other level to the classic Glenlivet. The nose is full of smoke and red apple. The palate has orange rind, toffee and toasty vanilla. The finish is complex with a spice and smoke.

Smooth, balanced and fruity. This well known classic tastes like summer with notes of pineapple and oak. A very gentle smokiness is present in the long and creamy finish.

Deep and sweet, rich and buttery. This expression is fruity and nutty with delicate spice and a lingering sweet finish.

A special, balanced and rich whiskey aged 18 years in American Oak and ex-Sherry casks. The aromas are rich with citrus and toffee. Flavors of orange and spice make this whiskey a good pair for red meat or rich dishes.

Rare and unique with notes of dried fruit. Gentle spice is followed by roasted nuts and more dried fruit.

Well, it’s old!!! And we all know when a quality whiskey ages it only gets better and smoother. On the nose you’ll find peach and pear notes with juicy raisins and dark chocolate. Mid palate there are notes of black cherry, pear and orange citrus. The finish is luscious and smooth as to be expected with a whiskey of this caliber. Glenlivet prices for the Winchester collection can soar into the $25,000 range due to it’s rarity.

The world’s first as far as a series of 50 year old single malts. The distillery will only release 100 bottles so these will be extremely difficult to get you r hands on! The nose is sweet and rich with fruity and juicy orange flavors. There’s a touch of cinnamon and licorice before the long, smooth finish.

Releasing only 150 bottles, this rare whiskey boasts aromas of apricots and peaches. The flavor is chocolate with hints of orange zest. The luxuriously long finish has a touch of sweetness.

This edition is only available to international travelers. You’ll find flavors a of pear, honey and oak.

A lighter version of it’s richer siblings which can be enjoyed with shellfish. The nose is heavy with pear and spice, there are nutty, fruity and spicy notes on the palate.

Part of the Master Distiller’s line, the reserve small batch is aged in individually selected barrels of rare whiskeys. This expression is also only available in Travel Retail. The nose is soft peach and ginger. The flavors are balanced with fruit, vanilla and licorice and pairs nicely with custard desserts.

Glenlivet prices are similar to Glenfiddich. They are also similar in flavors. Both considered fruity with a little sweetness, they are great for beginners. Glenlivet has stronger vanilla flavors while Glenfiddich is fruitier. Of course, we’re comparing the 12 years of both. A 750 ml bottle will cost you roughly $40 for eitherAnother great comparable entry level Scotch would be Macallan. Both are Speyside whiskeys. Macallan 12 year is a little darker and richer and Glenlivet leans softer and fruitier. However, Macallan is a little pricier at around $60 for a 750ml bottle. Glenlivet prices are considered reasonable for the quality of the product.