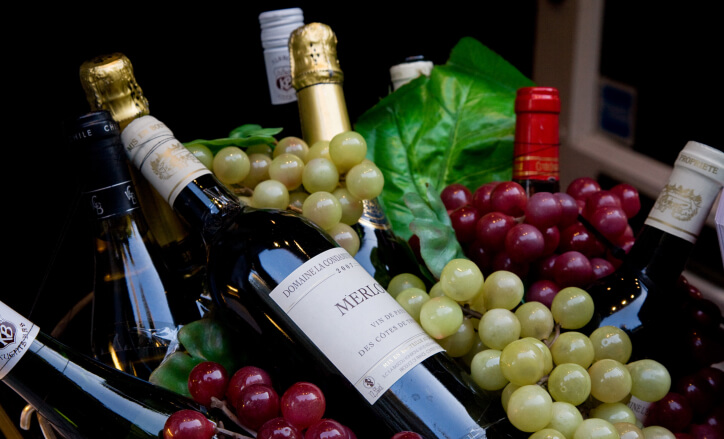 By the 1900s, Merlot was being grown in virtually every grape growing region around the world. The surge in popularity led to Merlot becoming one of the most prevalent wine grapes in the world.

The grape can now be found in many countries including Australia, Chile, Israel, Italy, Mexico, South Africa, and is seeing a spread from the western United States to states like New York and Virginia.

Most believe Merlot gained popularity for its easy growing demeanor and drinkability. Known as a “soft” grape, it is tolerated well by most wine-drinkers and features lower tannins.

Merlot is often found in combination with other grapes as a blend. Bordeaux uses from 25 percent up to a majority of the blend depending on which part of the region produces the wine.

Merlot as a varietal seemed to gain popularity in the United States after a report was released that linked wine to certain health benefits. Many red wines saw a surge of sales after this report but Merlot was said to be easiest to drink (and pronounce).

Like Pinot Noir, Merlot was featured in the film Sideways. Unfortunately for the varietal, it was presented as a “cheap” wine reserved for only the least classy wine drinkers. Merlot seemed to take a hit and saw sales drop in the time following the movie’s release.

It seems the grape has recovered from its bad publicity, as Merlot continues to be popular as a blending ingredient and varietal. There are myriad options ranging from extremely inexpensive to thousands of dollars price tags.

It Is Not All Red

A rare sight is the relatively newly produced White Merlot wine. It is produced by crushing the grapes then quickly removing the skins, leaving a pinkish juice behind.

These odd Merlot varieties began appearing in the 1990s and are still quite unusual to see.

There is a grape called Merlot blanc but it is a crossbred grape and not used to produce White Merlot.

Those who consider themselves wine connoisseurs can put their palates to the test by comparing these two wines. Often confused for each other, they both can count Cabernet Franc as a parent.

Merlot grown in cooler regions tastes quite similar to its sibling. Those “in the know” say the main difference is in the complexity, as Merlot is considered softer and fruitier.

What makes one Merlot more expensive than another? How expensive do they get? Let’s look for answers to these questions and more.

As mentioned earlier, Merlot has made its name on being an easy grape to grow. It prefers cooler climates but as evidenced by its presence in California, South Africa, Australia, and other warm regions, it can tolerate warmer conditions, as well.

This pleasant demeanor and relative ease of growing make Merlot a generally less expensive grape and wine than others. The Pinot Noir, for instance, is known to be finicky and challenging to get to good harvests.

Merlot is well-known for its ability to get along with other wines. It is featured in many different blends. Many winemakers blend Merlot with Cabernet Franc or Cabernet Sauvignon.

The ability for Merlot to blend with other wines has led to its inclusion in many high-end wines. Most offerings from Bordeaux feature some Merlot input with many having a very high percentage.

Like most wines, regional significance plays a major role in the cost of a Merlot. The “top dog” of Merlot producing regions is inarguably Pomerol. This region is known for its ideal conditions and produces a bottle of Merlot costing over $2500, on average - Petrus.

Tuscany, a famous wine growing and making region in Italy, features many wineries making Merlots that cost well over $150 a bottle.

Specific regions are best suited to grow the grape to its highest quality. The best regions include:

Some vineyards around the world produce specialty bottles of Merlot that can be expensive but as you can see in our price list below, Merlot is an inexpensive wine on average.

Noting the many bottles below averaging less than $10, a serious wine drinker may become concerned at what has led to such low prices. Unfortunately, the popularity of Merlot drove a bit of a surge in production.

Merlot began being produced en masse in areas that are not necessarily the optimal conditions. This led to a large volume of subpar Merlot wines entering the market and driving the costs down.

While the prices dropped, disinterest in the grape climbed. Some blame this overall lack of quality for the decline in Merlot sales, rather than the Sideways film. It became commonplace for Merlot to be considered only a blending grape and not a quality varietal.

As we have seen with more refined Merlot offerings, there are certainly good varietal options available well over the $10 price point. Vineyards are refocusing on the grape to improve the perception that Merlot is a cheap wine.

Choosing a Good Merlot In Your Budget

Now that we have discovered the wide range of prices and why Merlot is that way, choosing can be difficult. It could be tempting to assume that a $6 bottle is just undrinkable.

Price is simply not enough of a factor to make a decision on. However, you can consider it in conjunction with other inputs. Where was it made? Does the winemaker use Merlot in many wines or just as a one-off? Is the climate dry and warm, or cool and damp?

Answering these questions may lead you to discover that a pricier bottle may represent less quality than a more economical selection.