If you are a big fan of Vodka, then you must have come across the New Amsterdam Vodka either at a restaurant, a bar or in a friend’s fridge. The Vodka which is 40% ABV is produced by the New Amsterdam Spirits Company – a spirits brand based in the California US. The company is owned by E & J Gallo Winery.

The Vodka is filtered thrice and distilled a relatively high five times from the finest of grains. It was presented in 2011. The brand claims the vodka is so smooth you could just drink it directly. It has a clean taste that is crisp on the tongue. It’s also distinctive for making the ultimate cocktail.

According to Media Post, it became the quickest spirits brand to hit the one million cases sale milestone in history. This was after it sold that number in its first year on the market. Keeps you wondering it is, doesn’t it?

New Amsterdam Vodka, with a proof of 80, is one you can mix without any feeling of guilt. The filtration and distillation process beats the personality of the spirit into submission rather than kill it. It remains true to the Vodka’s heritage of neutral spirit while maintaining its own identity.

The Vodka has won some recognition and awards. This includes Platinum Class rating at the 2012 SIP Awards. It also won the Gold medal at the LA International Spirits Competition 2014 edition.

There is the original New Amsterdam Vodka. There are also different fruity flavors of the spirit.

Usually, an alcohol’s price reflects the method by which it has been processed. Vodka happens to be a varied and vast liquor category because it can be made by a considerable number of methods.

Barley, rye, and wheat are the classic raw materials used. Potato and grapes as well can be utilized. Unlike a couple of other spirits, you can produce vodka in any part of the world.

Vodka is distilled a lot of times and five times in the case of New Amsterdam Vodka to achieve an initial 90-95% ABV. This is to make the resulting spirit smoother and cleaner. The idea is that the more the number of distillations, the higher the strength of the spirit.

While the vodka goes through the still, the ‘tails’ and ‘heads’ are eliminated and the ‘heart’ which is the distillation part located in the center of each batch, is retained and utilized for the spirit, hence the purity and smoothness.

To eliminate unwanted impurities or flavors, the vodka is then filtered through limestone or charcoal. Then comes dilution by water. It’s this addition of water that reduces the ABV to 40%. The mouthfeel of the resulting liquids comes from the sort of water used. 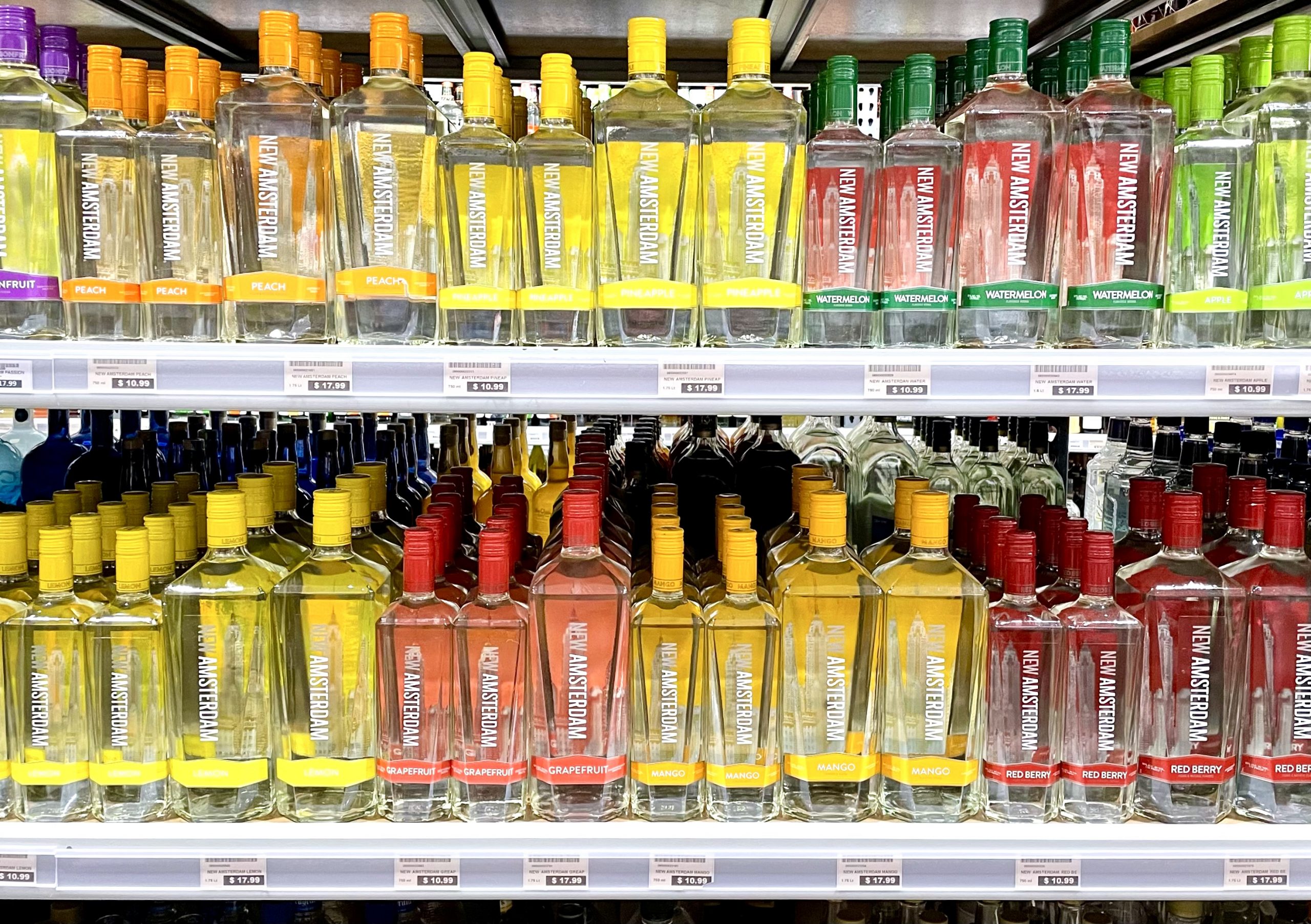 The price varies according to the proof and the flavor of the vodka as you can see in the table below. Despite the process, the vodka’s price is not considerably high. Most folks who consider the vodka as a premium believes the price to be rather fair compared to other vodkas.

The table below shows the price range in the US marketplace.

How is the New Amsterdam Vodka pricing compared to other popular vodkas? Let’s check it out.

From the above information, it is obvious that the New Amsterdam Vodka is relatively cheaper. Most of the other Vodkas costs a little more. It’s then understandable how the spirit is able to make so many sales in such little time.

When preparing cocktails with vodka, you can easily substitute one vodka for another. Most people won’t notice the difference. But the New Amsterdam Vodka has a distinctive taste that is perceptible to a connoisseur.

The amount of calories in the cocktail varies according to whatever it is you are mixing the spirit with. However, the calorie content in the vodka itself is not worrying. You might want to watch it depending on the quantity you are consuming though.

A standard drink you take should contain a little less than 100 calories.

Here are some cocktail recipes you could make with this smooth crisp-tasting spirit.