The origin of vodka lies somewhere in Slavic lands during the Dark Ages, with Russia and Poland getting into spirited public rows about who invented the spirit. While no consensus has been reached even by impartial historians, it is agreed that vodka was created somewhen between the 8th and the 12th centuries in Russia or Poland.

But that was in such a time and place that we can’t be sure. What we do know for certain is that the Smirnoff brand came to the United States from Europe in the middle of the 20th century, initially branded as “white whiskey” due to the popularity of that beverage at the time. It was the first successful brand of vodka in North America and has become the biggest seller of the drink, both in the US and abroad.

While part of the company’s dominance comes from simply being here (that is, west of the Atlantic Ocean) before anyone else, the company is trying to keep up work competition by offering us a lot of variety. Currently, they are selling three different types of plain vodka, with varying levels of alcoholic content, along with no less than 40 unique flavored vodkas.

Offerings as surprising as churro vodka and “fluffed marshmallow” vodka show that Diageo (the current British owner of the brand), will stop at nothing to try to get your business, no matter how particular your tastes or how capricious your curiosity.

“But how are they on price?”, you might ask. Well, the company appears to prefer to attract customers based on brand name recognition and its diversity of offerings rather than price. That is not to say that it is the most expensive - it certainly isn’t trying to compete with luxury brands like Grey Goose by claiming to offer a taste unmatched.

No, Smirnoff is somewhere in the middle in terms of pricing, as you can gather from the below price list: 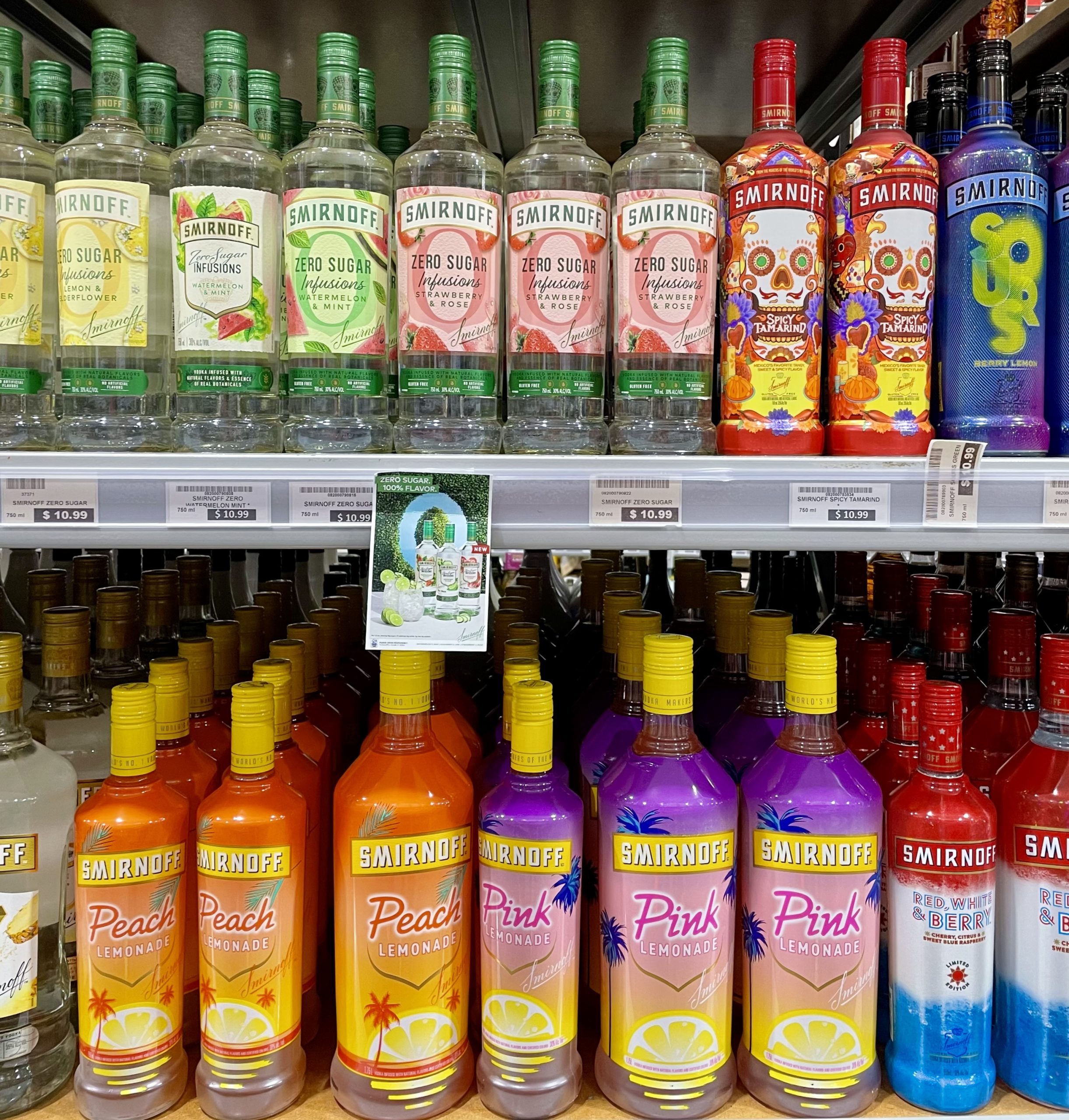 We won’t say that you can’t get a better deal anywhere else, because Smirnoff is several percentage points higher than the budget-class vodkas. Brands such as Taaka, Gilbey’s, and below all, Burnett’s, can offer you the the biggest bang for your buck at a price of around $13.00 per 1.75 liter-bottle for the 80-proof spirit. Some may say the taste of the cheapest brands is not as pleasant as the more expensive stuff, but like moonshine, it gets the job done.

Instead, Smirnoff competes on the same level as the likes of Skyy and Svedka. The latter is perhaps the most similar comparison, as it offers medium pricing on the basic vodka while offering a slew of flavored choices.

As for the prices of flavored vodkas, Smirnoff’s offerings also tend to be somewhere in the middle. Take what may be the classic flavored hard liquor, strawberry vodka, for instance. Smirnoff’s tends to sell at around $12.00 for the standard 750 ml bottle, whereas Pinnacle, Burnett, and even Svedka usually go for less than $10.00 for their equivalents. 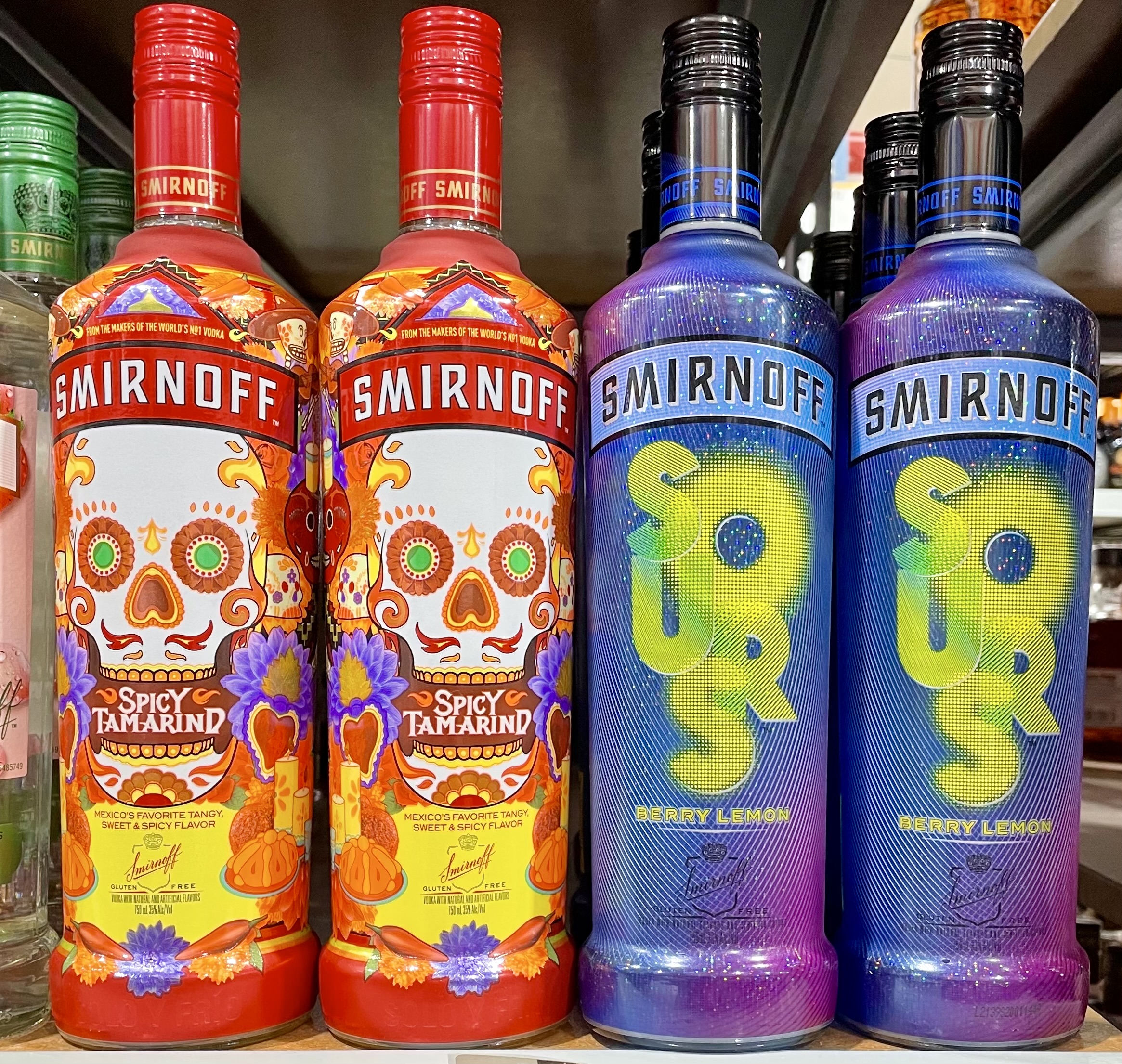 Smirnoff certainly has an abundance of flavors in their portfolio! From sweet dessert flavors to juicy berry and even spicy tamarind, Smirnoff has some of the most obscure infusions around. The prices are very affordable but may increase in areas where the product isn't as popular. If you can't find your favorite flavor at your local liquor store, consider ordering a bottle online. Just be sure to check the shipping costs!

It was recently discovered that the true cause of the infamous “Freshman 15,” or supposed 15 pounds of weight put on by college freshmen, may actually be a result of increased alcohol consumption rather than stale pizza leftovers, as was previously assumed by their parents.

Plain vodkas all tend to have a similar amount of calories, with different sources claiming a quantity of somewhere between 60 and 80 calories per ounce. Note that all of these calories come from the alcohol itself, so this assumes that we’re dealing with the standard 80-proof variant, which is  40% alcohol. With more alcohol at higher proof levels come more calories - about 7 per gram, to be exact.

Flavored Smirnoff vodka isn’t too different in terms of nutritional value, contrary to what you might expect. This is due to the fact that actual sugar or fruit isn’t being added to the drink in order to flavor it. Rather, much like any flavored soft drink, it’s usually artificial flavors that are infused into plain vodka to give it the fruity taste.

While some naturalists might take issue with the idea that no strawberries were harmed in the making of strawberry vodka, this is actually good news for those of us counting calories. One ounce will only set you back around 70 calories, which is only a few percentage points higher than flavorless vodka. Or, in statistical jargon, not significant.

Common Recipes: What to Mix With Smirnoff Vodka It is said that John Martin, president of the company that first turned Smirnoff into a household name in the US, went around bars in the country promoting the drink by photographing bartenders making the “Moscow Mule.” Today this classic is just one of the many popular drinks made with vodka. Here are a few of our favorite recipes using the spirit, with which you can delight your guests: This is a mule, or buck, which means that it’s a cocktail made with ginger ale or ginger beer. It’s probably the first widely-known drink mix involving vodka. Combine the following ingredients in a mug: In keeping with the Russia-themed names, the black Russian is another popular drink involving vodka and coffee liqueur. This one has a bit more alcohol than the Moscow Mule. Mix the following in a rocks glass: This is the same as the black Russian, except that it’s white in color: