Why is Crystal Head Vodka so Expensive?

You may have seen it on the shelves at your local liquor store, or in the home of your punk-loving sister-in-law, the infamous Crystal Head Vodka - presented in the beautifully shaped bottle. You know, the one like a human skull?

It may have crossed your mind as being marketed to the more sinister type of customer and perhaps a little high on price.

However, contrary to popular belief, the skull has deep spiritual meaning and just might be worth every penny.

The inspiration for Crystal Head Vodka was conceived in 2007 by it's founders, Dan Aykroyd (Actor) and John Alexander (artist). It is closely related to the legend of the Thirteen Crystal Skulls. This mystical story is based around positive energy, enlightenment, and spiritual power.

So what does this have to do with price? Well, there is a mythical story also attached to the way the Vodka is processed - something to do with a special gemstone - the diamond.

We will get more into this story shortly but, scientifically speaking, the diamonds don't really make a difference in the taste of this Vodka. 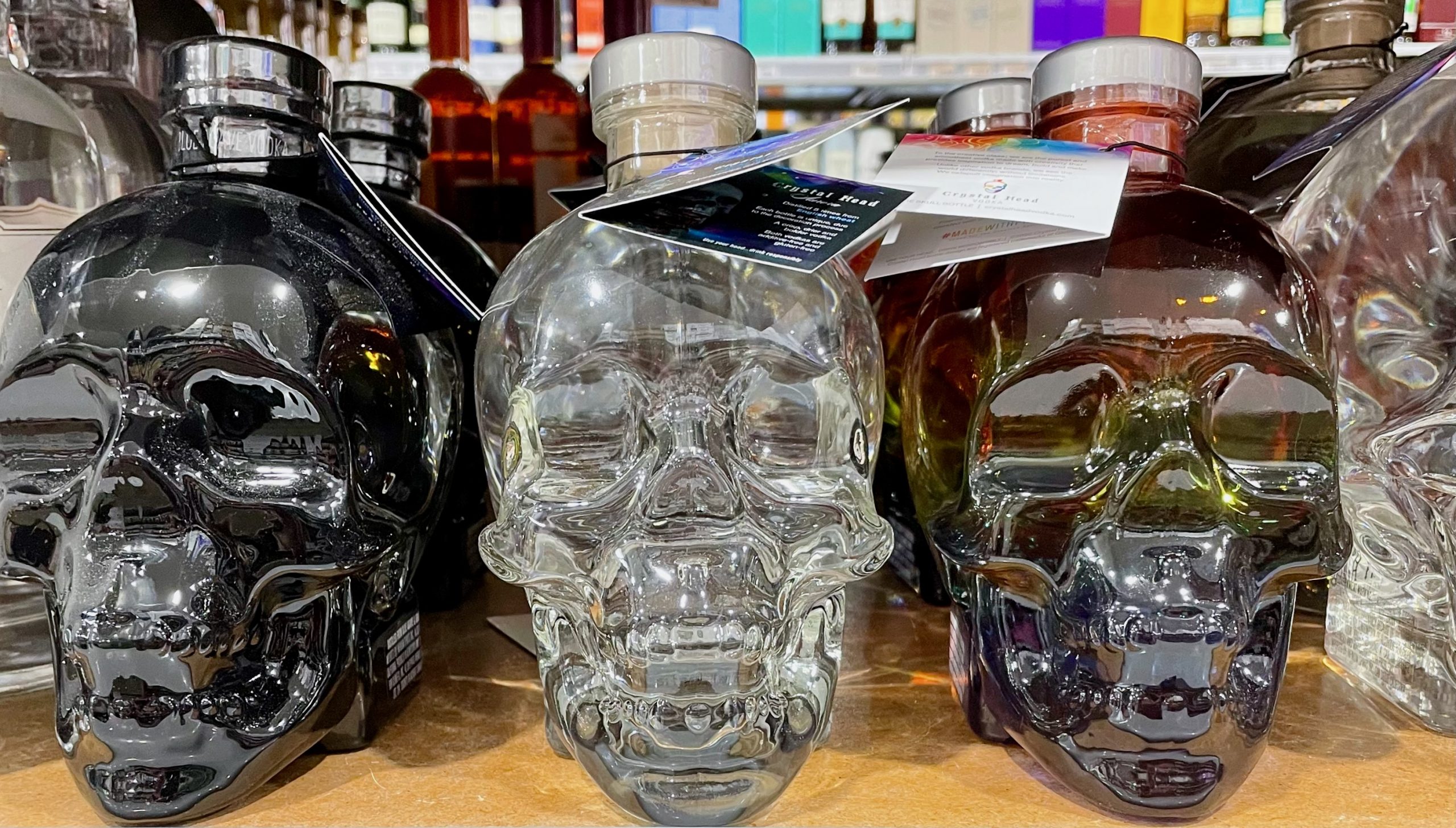 If you’ve read our previous articles like From Grape To Potato – What On Earth Is Your Favorite Vodka Made From, you’ll have heard that the price of alcohol is typically a reflection of its processing methods. Which leads us to our next point on Crystal Head Vodka.

Not only is Vodka made from a wide range of raw materials, like wheat, rye, barley, potatoes or basically anything that contains starch and sugar, but it is distilled various times through either column or pot stills to create the desired outcome that the producer is seeking.

One of the final decisions that a recipe maker has is how they filter the liquid (if they decide to filter at all) & what water will they use to dilute the 95% ABV spirit to one of 40%.

These two decisions will highly contribute to the mouthfeel of the final product which will also determine the price point.

One attribute of the Crystal Glass Vodka pricing is the design of the bottle. The notorious skull shape, designed by John Alexander took over two years to manufacture by Bruni Glass, a Milan based company. The process involves electrically charged powders in a sealed and pressurised chamber and the defect rate is at 40%.

Filtration - How it affects Quality and Price of Vodka

We know what you might be thinking, vodka is a neutral spirit, why are there so many options out there?

Well, you’d be surprised just how many things a connoisseur could tell you about the taste of vodka.

From peppery to creamy, to brioche and vetegal notes, there's a world of flavor that can be extracted by someone with a trained palate. They’ll may also remark on what you mix with the vodka. It could complement or clash, kind of like peanut butter and jelly, or toothpaste and orange juice.

Commonly, vodka filters through charcoal which will give it a ‘mouthfeel’ of medium body. If the desired outcome is for something with a super fine texture, the producer will run the liquid through the charcoal, twice. Contrarily, if they are after a thicker or heavier feel, they could use something like a metal filter.

Crystal Head Vodka also rocks a big name, having movie stars attached. The concept for the Vodka developed during the making of the movie Indiana Jones and the Kingdom of the Crystal Skull. The producer Steven Spielberg was impressed & served the juice at the movie premiere.

Pricing - What are the Different Filtration Techniques that Vodka Brands Use?

Let’s start off with Grey goose, your standard higher class vodka that appeals to the masses. The brand uses winter wheat that has been milled for 24 hours, and the liquid is distilled five times in a column still. Lastly, the Vodka uses calcium-rich water that is filtered through limestone.

Belvedere Vodka Unfiltered, the “Whiskey Drinker’s Vodka” uses bakers grade Rye grain which is distilled four times. The liquid is not filtered at all, giving it a full & rich mouthfeel. Unfiltered Vodkas have the benefit of savoring the taste of the initial raw material - in this case giving a freshly baked bread, caramelized taste.

Compare this to another Rye based vodka, Square One Organics. The brand does not believe in distilling, claiming that it strips the vodka of all its initial character. They give it one quick run through a 4 column distiller & utilize a simple micro-paper filter. Their methodology being, if the product is pure to begin with, why tamper with it?

The second coolest Vodka we have discovered is Reyka Vodka, who uses the natural wonders of Iceland for production; its glacier water with filtration through lava rocks. The idea is that the earth’s Volcanic layer soaks up any impurities within the liquid, and leaves the best bits behind.

But, what about Crystal Head Vodka?

Yep - this has to be the coolest for us; Crystals. Unique quartz crystals are known as Herkimer diamonds - the brand uses 10,000 of them, to be exact.

Crafted by one of the sweetest and most tender corns ever developed, the ferment is distilled four times and blended with water from Newfoundland, Canada. Crystal Head Vodka is filtered seven times in total, with three of them being through the diamonds. To finish nothing extra is added to the Vodka.

What does this do for the Vodka?

The only experiments include those of consumers who have trialed the product both with and without the filtration through the precious gemstones.

The diamond batch always won with comments like “it's smoother” & “just tastes better.”

A list of the Various Crystal Head Vodka Prices:

What to mix with Crystal Head Vodka

As the Crystal filtration itself through the diamonds adds absolutely no flavor to the Vodka, the benefits are that it leaves a blank canvas that consumers can use to add their preferred ingredients.

Here are some ideas for your Crystal Head Vodka drinks:

This is a mule, or buck, which means that it’s a cocktail made with ginger ale or ginger beer. It’s probably the first widely-known drink mix involving vodka. Combine the following ingredients in a mug: The Legend of the 13 Crystal Skulls

Let us just finish with this epic tale of the 13 Crystal Skulls.

This is a legend that has been passed down (across various cultures) from ancient Mayan, Aztec & Native American times. There is a quote that states that the skulls were kept inside a pyramid, 12 representing each of the planets and the 13th representing human consciousness.

The 13 skulls were made perfectly out of clear and milky quartz and buried all over South America.

The spooky part is, that the skulls were cut against the “axis” of the crystal - which goes against the molecular structure and would essentially shatter the entire piece.

Founders of each of the skulls have claimed special healing powers were delivered to them via the rock - like healing brain tumors.