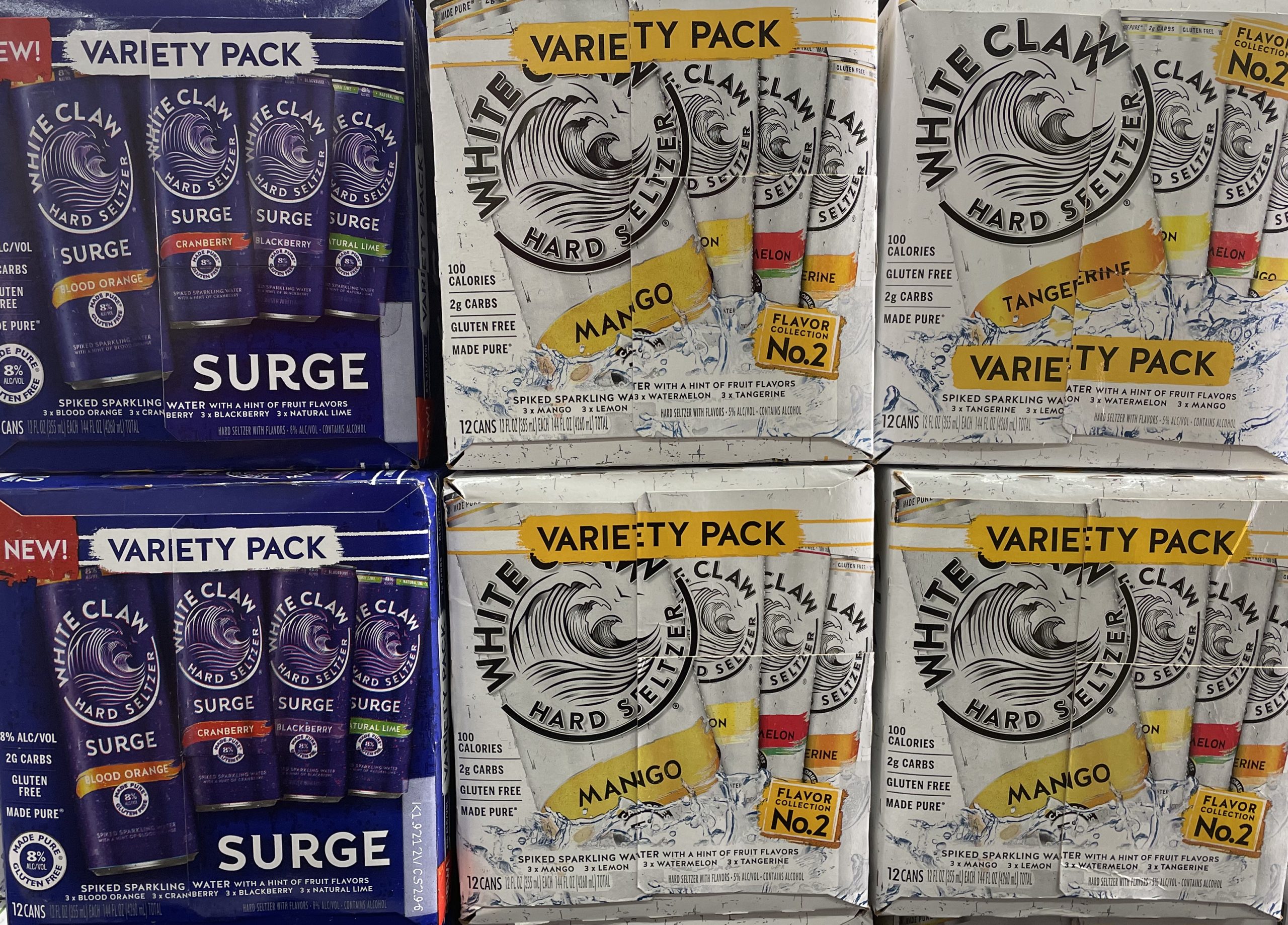 By now, you’ve probably heard of hard seltzers. And because of their growing popularity, you might have even tried a few. Maybe they’re your go to choice for alcoholic beverages. But what exactly is a hard seltzer and are they really healthier for you than spirits or beer? In this article we’ll explore different brands, flavors and ingredients to get to the bottom of this adult beverage craze.

Adult seltzer, spiked seltzer or hard seltzer is technically a type of drink known as a highball consisting of alcohol, carbonated water and usually some fruit flavoring. Depending on the brand, the fruit flavoring can be from natural juice or artificial flavoring. Most hard seltzers produced in the United States are distilled from cane sugar but some are made with malted barley. Many outside the US are made with neutral spirits or fermented fruits. The alcohol content is generally around 5% abv (alcohol by volume), but some can be as high as 12% abv. Now that we know the basics, let’s look a little harder at what’s actually in these cans.

Manufacturers have sneaky ways of listing ingredients. For instance, one may label a beverage as “all natural” because technically any flavor or sugar that is derived from a fruit is termed natural. However, they do not disclose that they have often altered the fruit’s properties. This can impact the way our bodies process these sugars. Therefore, if your goal is to find a healthier alternative to beer or hard alcohol it’s a good idea to do a little research on the brand before you buy.

How does hard seltzer compare to other alcoholic beverages in terms of health?

The average light beer has roughly 105 calories in a 12 ounce bottle or can. A regular beer contains approximately 150 calories. Whereas craft or higher proof beers are closer to 200, but some can be as high as 350 calories. On the other hand, most hard seltzers keep their calorie count at 100 or below per 12 ounce can.

Okay, so low calorie is good, but what about carbohydrates and sugars? The results may surprise you especially since many people think of hard seltzer as a healthy option. This opinion often leads people to consume more which is were some ingredients start to add up quickly. The average light beer contains only .3 grams of sugar whereas the leading hard seltzer has 2 grams. Doesn’t seem like a lot, but when you’re consuming multiple cans throughout the day it can sneak up on you. Hard seltzer is however substantially lower in carbs at around 1-2 per serving whereas the average beer packs in around 13 grams. At the end of the day, it really depends on your diet, taste preference and amount consumed. It is a healthier alternative to super sugary mixed drinks and some high alcohol beers. But remember, just because they are light in flavor, calories and carbs they aren’t as filling. Someone who’d usually only have two beers might end up having multiple cans of seltzer.

Hard Seltzers come in a wide variety of flavors, but here are some of the most common:

Exceeding 25% in sales, black cherry has topped the charts in the US. Mango is second with around 15% followed by lime. Citrus flavors are declining as consumers branch out to more tropical and exotic flavors.

When will the hard seltzer craze end?

Despite some speculation that the fizzy beverage bubble is about to burst, we think the market is going to continue to grow. With many Americans looking for low-carb, low-calorie and low-sugar alternatives many manufacturers are marketing to this health conscious crowd. According to grandviewresearch.com the global hard seltzer market size was valued at USD 5.6 billion in 2020 and is expected to expand at a compound annual growth rate of 31.4% from 2021 to 2028. The rising adoption of low alcohol content beverages among millennials is also driving market demand.

What are the most popular brands of hard seltzer in the US?

White Claw is the most popular brand of hard seltzer in the US.

It currently dominates the spiked seltzer market with sales reaching $4 billion in 2020. What makes White Claw so popular you ask? Well one thing to note about the brand is their marketing. The alcohol industry continues to shoot itself in the foot when it comes to beer and wine ads. Television has made us believe beer is for men and wine is for women. Many beer commercials over the years show bros toasting brews on game day or sipping suds on a golf course. Opposingly, wine commercials are often directed towards stressed-out suburban house wives. Notice the catchy labels from brands like Skinny Girl, Mad House Wife, Happy Bitch and Mommy Juice? Even when alcohol companies realize their gender focused targeting excludes a potential client base they tend to overcorrect with even more sexist ads that sometimes make things worse.

White Claw has managed to avoid all that whiplash by marketing to men and women equally. There’s a clean 50/50 split amongst millennial men and women who are the biggest consumers of the spritzy spirit. White Claw accounts for more than half of hard seltzer sales. Women love it and even the most macho men love it. Comedian Tervor Wallace’s testosterone soaked YouTube video has received millions of views. The video is laced with many one-liners such as “it’s like Perrier that does squats”. This is also where the famous catchphrase “ain’t no laws when you’re drinking Claws” comes from. In their commercials, there are men and women equally present and instead of seductive advertising, women are featured as athletic. In conclusion, White Claw’s success is directly related to their marketing.

Truly is the second most popular brand of hard seltzer in the US.

Coming in second with $1.7 billion in sales is Truly. Turns out Truly is siblings of Sam Adams which is made by Boston Brewers, one of the countries biggest craft brewers. In September of 2019 Truly announced a five year partnership with the National Hockey League and later in the year teamed with Jet-Blue to offer their seltzer on select flights. No doubt the success of Boston Brewers helped propel Truly Hard Seltzer to the second most consumed can of bubbles in the US. You can score a 12 pack case for approximately $14.

The seltzer line from Anheuser Bush is newer to the market hitting shelves in January of 2020. It’s already super popular likely due to their comical ad campaign that aired during the Super Bowl and opening games of the XFL’s first season. It also didn’t hurt that the logo was worn on players’ helmets and painted in end zones. Each 12 ounce can contains 2 grams of carbs, 100 calories, 1 gram of sugar and 5% alcohol. It is made from cane sugar and natural fruit flavor and is available in four flavors. Anheuser Busch has since launched quite a few different lines of spiked sparkling beverages. Seltzer Lemonade, Platinum Seltzer, Seltzer Iced Tea and of course holiday flavors like Bud Light Ugly Sweater Seltzer are just a few. A 12 pack will cost you around $14.