Energy drinks continue to see wild popularity despite multiple negative reports about their impacts on the body. The energy drink market, which includes brands like Monster, Red Bull, and Rockstar, trends upward with sales estimated to reach over $60 billion by 2021.

The World Health Organization (WHO) has claimed that energy drinks “may pose a danger to public health.” Are these health-related statements true or simply the result of limited cases of overindulgence? Comments like these from widely respected organizations have led to the common question: How do energy drinks affect the body?

The American Beverage Association (ABA) indicates that energy drinks are entirely safe. The Association, with an obvious bias towards its industry, points to ingredients being subject to strict safety guidelines and that many of those ingredients are found in other food products considered safe (see chart below).

After reviewing the chart above, it is easy to see the point being made by the ABA. The vast majority of ingredients found in a can of energy drink can also be found in foods everyone would consider healthy. Before we go any further into the actual impacts of energy drinks, let’s take a look at how energy drinks work to provide an energy boost. 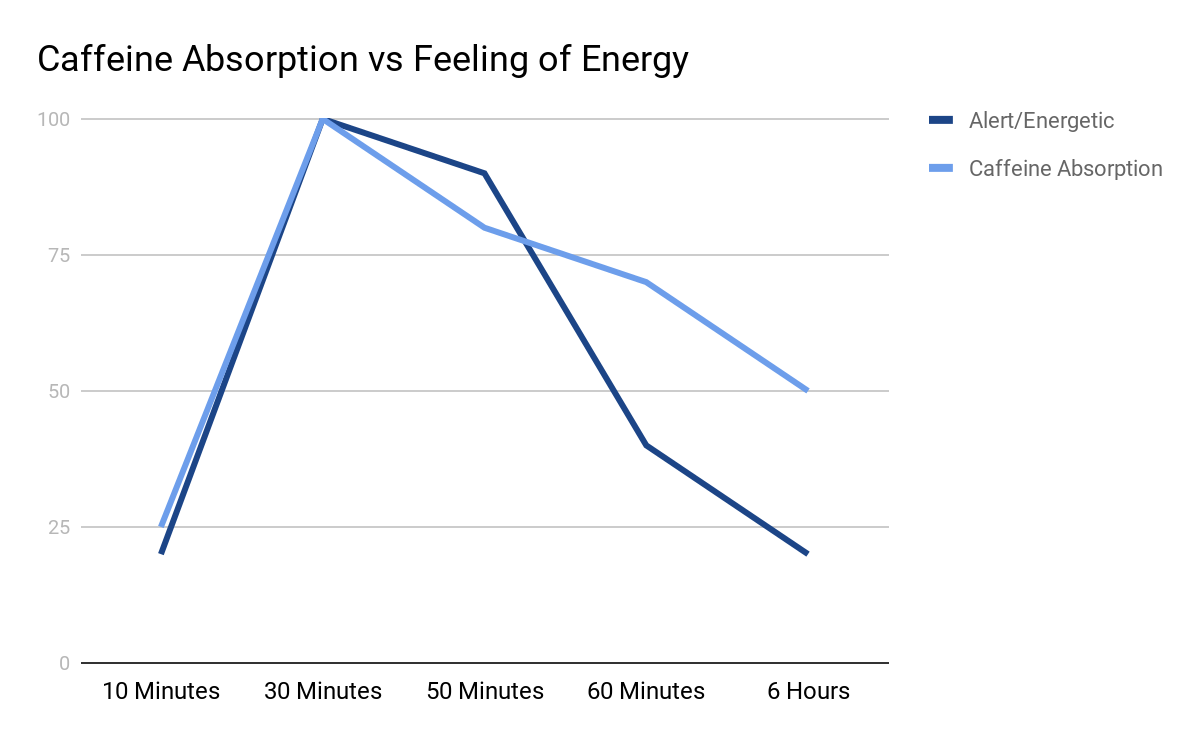 While most energy drinks contain B vitamins, Taurine, and L-carnitine, caffeine does most of the heavy lifting to provide the feeling of an energy boost. So what happens when you consume caffeine?

As you can see above, the maximum absorption of caffeine occurs about 30 minutes after consuming an energy drink. Unfortunately, the loss of that energetic feeling far outpaces the rate at which caffeine leaves the bloodstream.

Within 60 minutes of consumption, the typical person (who is conditioned to drinking caffeinated beverages) will experience a loss of manufactured energy even though it takes six hours for half of the caffeine to leave the bloodstream.

Energy drinks hold some value for temporary increases in the feeling of alertness but are rendered ineffective to produce actual sustainable energy. This can lead to a desire to consume more, in turn creating an environment favorable for some of the health issues presented by energy drink detractors.

The Negative Impacts of Energy Drinks on the Body

It is also fair to mention, before embarking on a list of potential negative impacts of energy drinks, that the United States FDA and European Food Safety Authority consider energy drinks safe to consume.

Below is a list of the common negative impacts of energy drinks along with some suggestions for avoiding such outcomes.

It is important to realize that the effects of caffeine on the body are exacerbated during childhood and the teenage years. The Centers for Disease Control and Prevention (CDC) has reported that while caffeine intake is not on the rise, the consumption of energy drinks amongst juveniles is.

This is worrisome for two reasons. First, there is little to no research on the impacts of the ingredients other than caffeine has on young bodies. While natural and unrestricted by the FDA and other food safety agencies, the ingredients like Taurine and Guarana are unresearched. Secondly, the American Academy of Pediatrics (AAP) recommends against any caffeine in the diets of children.

Another ingredient to consider with caution is sugar. Caffeine gets most of the bad press but many energy drinks contain exorbitant amounts of sugar. Excessive consumption of high-sugar foods and drinks can lead to sugar addiction (a compounding problem), insulin resistance (leading to diabetes), and obesity.

Some energy drinks contain over two times the daily recommended amount of sugar in one serving. The WHO suggests six teaspoons should be the upper daily limit while energy drinks can contain 13 teaspoons in a serving.

It is important to consider these negative impacts when deciding whether to drink an energy drink or not. It would appear that young adults comprise a significant slice of the energy drinking demographic and this is worrisome, given their vulnerability to the effects of sugar and caffeine in their diets. However, not everything to do with energy drinks is bad!

The Positive Side of Things

The caffeine content of energy drinks is often overstated. In fact, a typical can of Red Bull (250 ml) contains less caffeine (80 mg) than a comparable cup of Starbucks black coffee (up to 330 mg in 16 ounces). There have certainly been more publications touting the “dangers” of energy drinks than those telling consumers to avoid coffee.

Moderation is a powerful tool for those who consume energy drinks. Reserving the caffeine-laden products for a “once in a while” moment can essentially eliminate all the risks associated with them.

For those concerned with the possibility of heart complications or other serious side effects, consult with your doctor about your health and associated risks. For everyone else, take this information and decide whether or not you should be including energy drinks in your diet.